Clean Ocean Surfboards was founded in the spring of 1989 by Tony Iannarone and Mark Reichenstein.  Tony had been introduced to shaping several years earlier at the age of 13 or 14 by his cousin Dean Pesanti who had done some shaping in the late 70’s.  All boards shaped before 1989 were backyard and or shed models, which never made it through the glassing stage.  In 1990 Tony graduated from Jacksonville University with a Bachelor’s degree and moved to Ocean Beach San Diego.  While in O.B., he worked and studied under William Graham.  Under Graham, Tony learned the art of traditional glassing techniques.   Cut lap laminations, resin tints and Volan glass jobs laid the foundation for the type of work Tony would excel at years down the line.

In 1993 Mark left the company and Tony left O.B. and returned to Florida to work on a Master’s Degree at Jacksonville University.     While working on his MBA, Tony’s shaping career really started to skyrocket.  By the time he graduated in 1995, he had his own factory where he could have total control over how his boards were being made.  Tony prefers keeping his hands on his boards through the whole building process.  By the end of the 90’s, he had dealers selling his boards all over the east coast, in the Republic of Panama and Great Britain.

On his birthday in 2001, Tony opened Clean Ocean Surf Shop which is a throwback to the days when surf shops were built around SURFBOARDS and Surf Culture.  Through the 2000’s, he survived some serious health issues, the closing of Clark Foam, the Chinese pop out invasion and the recession of all recessions.  Through all the turmoil, Tony never lost sight of his goal of building both high quality and innovative surfboards. Keeping all production in-house allows Tony to continue to evolve his shapes and evolve as a board builder, experimenting with new materials and glassing techniques.     In 2020, Tony will build his 11,000th surfboard, 95% of which have been hand shaped, the way it’s supposed to be! 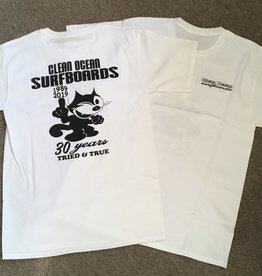